In early February 2015, a huge reptile was photographed swimming in Plymouth sound, Devon; with several local people claiming to have observed the strange creature swimming half-a-mile offshore. Allan Jones, a university technician who reported the sighting had a telephoto lens with him at the time and managed to capture a number of images. He said: "At one point it was near a boat and it looked about the same length. I've never seen anything like it - the first thing that struck me was that it looked just like a huge crocodile, The first photo I took I was up by Smeaton's Tower, but then I went down towards the sea for some closer shots. The creature or object moved in circles, appeared to curve its shape and moved a considerable distance from left to right, turned and then moved back the other way. I have circled a piece of floating wood that floated up to and past it. The creature or object then turned and remained stationary. It was very strange. It must have been 20-foot long. And it was moving against the current at some points. I'd love to know what it was."

This sighting has a great degree of credibility. There are so many facets that enrol themselves as a witness to the validity of this testimony that it scarcely seems worth defending or explaining. But, in order to juxtapose this sighting against others and validate its criterion, let us examine the verbal and physical evidence as we see it. In the first instance we have multiple witnesses that viewed the creature moving against the current, saw it circling and curving its shape and therefore it could not have been an inanimate solid object. We also have a boat in the background to give it some scale and several photographs taken by a ‘university technician’ with a telephoto lens from 2 separate vantage points, that place the creature in several different locations, swimming both with and against the current, therefore proving its animate nature, for as we all know; flotsam does not possess the ability to either change its shape or actively move against the current. The portion of the creatures back that is visible in the photos has the appearance of being bumpy or pocked in a similar (but not exact) manner to that of a crocodilian, but with a strange small, sail-like spine and small rounded lizard or snake-like head, which tells of an altogether different genus for this creature than that of a member of the crocodylomorph family.

So, once again we come to this identity crisis, a taxonomic tossup, as to which order this creature belongs. If we look in to the history of the coastal area around Devon and Cornwall especially, we find many similar accounts of strange reptilian sea monsters and of course some photographic evidence as well, that may offer some familial support in reference to extending the credit of this errant and troublesome visitor to our shores and the unfortunately speculative lives of all cryptozoologists as well. Fortunately for us in this case this whole area is replete with sightings of similar beasts and strange oceanic visitors.  In 1975 we hear of a sighting of a large creature with a humped body, long neck and small head with black-brown skin like a sea lion that was witnessed near Pendennis Point, Cornwall. The creature was photographed and the photo donated anonymously to The Falmouth Packet Newspaper, the following year in 1976. The creature was given the name Morgawr, which means Sea Giant in Cornish, by self-proclaimed Wizard and alleged conjurer of these aquatic beasts, Tony 'Doc' Shiels. In point of fact the photo by Mary F is also allegedly a manufacture of this controversial ‘Wizard of the West’ and bears a striking resemblance to a photo he allegedly received from Edward Kelly, also an alleged hoaxer, of a creature in Lough Leane in County Kerry, Ireland in 1981.

When we are faced with such indeterminate evidence and questionable character, we certainly are not able to ascertain the truth from such sources and must revert again to the unwilling and antagonistic witness and rely upon the power of trauma upon those whose memory has been shocked in to remembering an unusual encounter, as something of such an unnatural animality, that it will be emotionally burned in to the brain of those who experience it.

There have of course been many other regular witnesses over the years, but the local acceptance of a creature borne out in superstition, but also based in reality has had a mixed effect on the perceived folkloric element of the creature whose presence is said to be prefaced by a scarcity of fish and the coming of bad weather. Whether or not this is mythology mixed with experience we cannot know for sure, but historically speaking, most attributed supernatural animal powers are an interpretation of natural events viewed through the lens of superstitious culture and tradition. However, the history of British Water Monsters is replete with hoaxers and fakers and although we are in a time when cryptozoologically speaking, Bigfoot is King! and the hay day of Nessie-like reports and newspaper articles have certainly waned; our aquatic cryptids of lakes and lochs and our mystery migrants from the sea, still have the ability to steal the headlines, at least for a morning or an afternoon and very occasionally for the most bodacious of serpents, until teatime.

The Plymouth Crocodile is an excerpt from my book - Beasts of Britain. 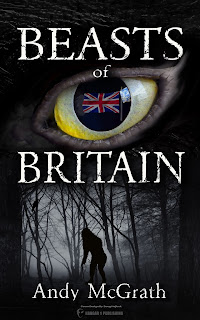