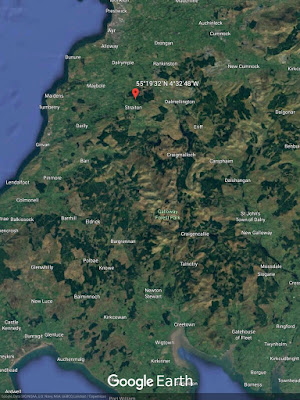 I recently learned of a strange event which took place in the vicinity of Balminnoch Farm, Kirkmichael Rd, near the hamlet of Straiton, Ayrshire, sometime around the 18th or 19th April, this year.

Two men were out hunting in the forest behind Balminnoch Farm, at approximately 11pm when they both came running out of the woods in a very frightened state. Both men believed that they had witnessed a large looming, bipedal figure, very dark in colour and possibly around 9 feet tall!

Bigfoot researcher, Robert Shankland, who initially received the report from a 2nd hand source, visited the location and was met by a local farmer, who greeted him saying, " I know what you’re going to ask me about, so you start talking and I'll tell you if it's about the same thing ".

He then went on to confirm that the story was legitimate and that, it was in actual fact, his own daughter's house that the two men had run to in their panic, banging on the door until she opened it.

The farmer phoned his daughter, (who was in work at the time) who then proceeded to tell Robert that, "The witnesses came running out of the woods like two wee frightened schoolgirls!"  and were in, "A very agitated and nervous state indeed!”

One of the men, in particular, was, “Very, very scared, of something they had both just seen in the forest.” She also said that the men claimed to have seen something in the forest that was, “On two legs, bipedal, very big & looming.”

Balminnoch Woods is a sizable area, with a small loch to the North, located in The area of Straiton, on the Galloway Forest Park boundary, in which there was a large forest fire, a short time before this sighting occurred, which damaged 5 miles of woodland!

This particular area has become synonymous with possible Bigfoot activity, where our valued correspondent, Robert Shankland, has found several unusual prints and other anomalies.

Scotland is a vast and pristine nation that boasts a trifling 1.9% of its landmass devoted to urban sprawl. If a Bigfoot-like creature were to endure here in the UK and resist our best attempts to capture and catalogue it, I can think of no more remote a realm in our beautiful isles, than there!

By Andrew McGrath
(Beasts of Britain) 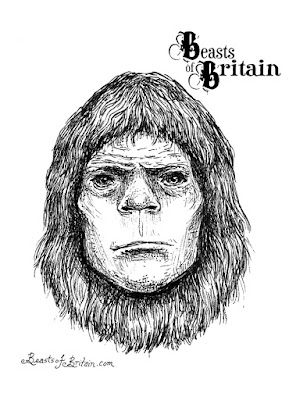