In our present age of tweets and memes, fake news and social media witch hunts, one can be forgiven for thinking that the generations that spring forth from this new cultural self-over-exposure, will be buffeted about on the winds of opinion, no strangers to a change of direction, if only enough righteous tweets and screets are aimed in their direction. It is this culture of amnesiac emotional and moral shifts where we currently find both judge and jury in full swing, operating outside of the authority and safety of the courtroom, where evidence is no longer king and the accused is guilty until proven innocent! This is now our de facto reality in our trial by twitter world! It is, therefore, no surprise that the philosophy one ascribes to, even in our very own slightly 'south of heaven' genre of the unknown, can make or break your acceptance into the higher echelons of the initiate opinion-makers of cryptozoology and the paranormal. Historically those who have risked a defined opinion outside of this scope have been summarily discredited or ignored by a histrionic culture of mystery crusaders and paranormal propagandists. This can be seen in a reticence to identify reported cryptozoological creatures as defined animals,  based upon corroborative anecdotal, photographic and film evidence; and a default position which attempts to identify all uncomfortable creatures of cryptozoology as either monster imposters, or in cases where the eyewitness is very credible and descriptive, as paranormal in substance and therefore out of the scope of explanation by natural means. Thereby closing down all discussion upon the zoological nature of these creatures and effectively handing over the investigation to the department of the paranormal for further 'study'.

In fairness to the pursuers of the paranormal there are certainly enough mysterious reports out there to be rightly and justifiably 'passed' on to them and even some of the more ambiguous cases could easily belong to their camp. However, being of a practical nature myself and having grown up in a religious environment, I see clearly how one's personal philosophy, or faith, can have a significant effect on the perception of what one sees, or believes to see and how personal desire can imprint its own interpretation on to what we observe. In more ancient times, in the west at least, we projected our superstition on to the things around us and imbued their wondrous physiological traits with supernatural meaning. I personally lean towards the philosophical position that ancient societies spiritualised animal traits that they could not understand, and I see that in our modern times we have slid towards a position of selective belief in the unknown. This seems to manifest itself as either a desire to discredit those that witness creatures whose existence we do not accept ( i.e. - yes to Bigfoot, no to Nessie!) or conversely seeks to attach a personal spiritual or supernatural significance to their abilities (i.e. - camouflage and infrasound as a spiritual power!) This particular DIY pseudo-spirituality being something that has seen a resurgence in recent years, due largely to the influential absence of organised religion in western societies.

As the old adage goes, however, there are of course always 3 sides to every story, my side, your side and the truth! Therein enters the spectre of perspective and the ugly ogre of subjectivity to which every scientist and layman alike must give deference and bend the knee. Anyone who thinks he is above this particularity is simply fooling himself; and is hopelessly shackled to the notion of his fallacious philosophy as fact, which of course as we all know, is inadmissible evidence when it comes to explaining the unknown. 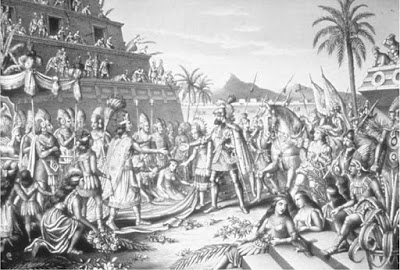 When interpreting the extraordinary, we would do well to remember those dumbfounded souls who have gone before us and similarly to ourselves; have used a religious perspective to interpret the seemingly unexplainable sights that assailed their otherwise acute senses. One thinks of the Aztecs seeing the ships of Cortez in the distance and imagining them floating mountains or in their ruler, Moctezuma the 2nd, who thought Cortes to be the god, Quetzalcoatl, returning from the east; and thus saw the arrival of Cortes and his men as sacred. This blind belief, sadly signalling the beginning of the end for the Aztec nation.

Yet another lesson in the paucity of perception can be found in the first descriptions of the former cryptid and original Wildman of the woods, the Gorilla, which is a wonderful example of an ill-fitting substitute being used to describe that, for which we have no applicable comparative reference in nature. This 'Hairy Man' of the forest, originally known to the Mpongwe people as the shy, yet ferocious  'Enge-ena', may in fact stand as a template for the modern day Bigfoot (Sasquatch, Wodewose, Yeren, Almas or Yeti) in that its folkloric reputation and characteristic ape-like features and behaviour, mimics those reputed to belong to our mysterious wood apes. Even the name Gorilla, meaning "tribe of hairy women" in ancient Greek, was reputed to have been given to a savage tribe, who confronted the Carthaginian, Hanno The Explorer, when he travelled to what is now Sierra Leone in 500 BC. 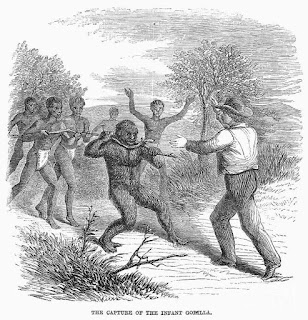 Day after day I am pleased to receive correspondence from researchers and interested parties alike who are in the field, so to speak, searching for proof of our current cryptozoological Elvis, that has these last few years superseded 'Nessie' to become the number one most sought-after and philosophised cryptid in our world. Starting with popular TV shows like Finding Bigfoot and its many comical spin-offs (Killing Bigfoot) and then spreading out to various social media sole practitioners; The 'Squatch' truly has become a western hemispheric phenomenon! This in itself has brought to the field of 'Bigfootery' a rather divergent and loosely connected crowd, simultaneously incorporating many faiths, that includes anything from the underwhelmingly mystical to the overtly scientific and more besides, each in turn staking a claim to owning superior theory, but being just as reliant as the others on faithful disposition to prove their conclusions. I have, for example, lost count of just how many red circled blurry bushes I have had to stare at, out of politeness, whilst being fed some unlikely tale of a trusted daily communion with the alleged creature/s that somehow fails to yield any clear pictures! Or conversely, how many pseudo-empirical brush offs of corroborative physical and photographic evidence do we have to endure, to offer up a pleasing and scientific atonement, to prove the existence of what appears to be a very shy and intelligent animal?  Finally, the financial reward of chasing the beast that is Bigfoot seems to be too lucrative to dissuade the entrepreneurial kind from plundering the pockets of the naive or even just the nostalgic pilgrims of the paranormal, to whom the possibility of the unknown overrules the probable and paves the way to poorer probity.

Again, the absence of corporate religion and the search for spiritual importance in our modern age has led to all types of paranormal pursuits that feel as though they have been forced upon cryptozoology like an ill-fitting shoe. We hear much about Bigfoot 'cloaking', much like the creature, the Predator in the 1980's action movie turned franchise; and immediately have to wonder if indeed life apes film, or is it more likely to be vice versa; that our mentally ingested creatures of the stage and screen are brought forth in unusual and stressful circumstances, in which we find ourselves lacking a descriptive reference to provide an easy in an out explanation for what we have just experienced? Many animals that change their colour, camouflage or 'cloak', like the Octopus or Cuttlefish, are well within the boundaries of natural science, but may not have been perceived as such, by those uninitiated natives who first beheld their magical abilities centuries ago!

So what can we conclude? Simply that anecdote is more oft than not an accurate portrayal of the experience of the witness, but fallible due to its subjectivity to the comparative mental library stored within the witness's own mind and of course their ability to respond and function in highly stressful and confusing situations. This is the reason that even witnesses of the same phenomena are treated piecemeal and preferably separated one from the other in order to gain an uncontaminated rendering of their experience. There are of course several threats to genuine reporting in the current climate of commercial cryptozoology, which undoubtedly pose a threat to unimpeded scientific study. Albeit, there is much that needs to be done to restore the credibility of the much-maligned witness. I personally feel that a wholesale rejection of  'draw a circle around it' evidence and the fanciful fantasies of 'the monster whisperers'; who seem to be able to simply assert that they are chosen and perceptive and communicating on a higher plane, as proof beyond doubt that their blurry bush buddies are ultimately deserving of a red circle and a whole host of happy devotees, is at least a start on the road to real discovery. Regardless of whether those discoveries be of the conventional persuasion or the paranormal kind.